For University of Tulsa athletic director Rick Dickson, there are challenges (like fundraising) and there are problems (like the last-place performance of the Golden Hurricane basketball program, plus the worst home-game attendance for TU basketball since before Nolan Richardson was hired in 1980).

When you do overhear Hurricane basketball talk around town, it usually centers on whether TU is about to make a coaching change after eight seasons with Frank Haith.

Dickson had a lot to say during a Saturday interview, but wouldn’t say much about his basketball coaching situation: “I never have and never will address (a coach’s status) until things are completed.”

Tied with South Florida for last place in the American Athletic Conference, Tulsa is 9-19 overall, 7-8 in home games, 3-14 in league play and on the brink of what would be the program’s first 20-loss season since 2004-05.

At 1 p.m. Sunday, TU closes the regular season by hosting UCF. If the Hurricane stumbles, the TU program would be doomed to a losing home record for the first time since 1976-77 and for only the second time in 60 years.

A former TU athlete and the university’s athletic director in 1990-94, Dickson paused his retirement and returned to his alma mater in September 2020 as the interim successor to Derrick Gragg. Ultimately, the “interim” label was dropped as Dickson agreed to a three-year contract that expires during the summer of 2024.

Related to COVID-19, there were attendance restrictions and rampant abnormalities during Dickson’s run through the 2020-21 TU sports calendar. In 2021-22, he’s gotten a clearer look at TU’s marketing failures (my words, not his) and attendance crisis (in 2021, a 16,077 football average at 30,000-seat Chapman Stadium; and a current 2,866 basketball average at the 8,355-seat Reynolds Center).

“This tire is flat,” he said before heading to a Saturday fundraising appointment in downtown Tulsa. “We’ve got to do a deep dive on everything — on our whole game-day experience.

“The experience has to be better, and it will be. That’s the commitment I’ve made.”

This is the essence of a marketing failure: In an email, a Tulsa World reader explained that he and his wife are TU graduates and for several years have been football season-ticket holders. Not once, the reader added, had he or his wife been contacted by the university regarding basketball tickets. Unbelievable.

I forwarded that information to Dickson, who contacted the couple, invited them to a basketball game and sat with them at the Reynolds Center. By their end of their time with Dickson, the couple indicated they would become Golden Hurricane Club members and were committed to purchasing season tickets for football and basketball.

If Dickson’s common sense and Customer Relations 101 acumen could be applied to all facets of athletics marketing, TU would score significant gains.

While Oral Roberts University has three acres of free parking on the Mabee Center property, Dickson is aware of the persistent complaints about the lack of TU parking near Chapman Stadium and the Reynolds Center. Also, 11th Street can be a difficult and dark crossing for pedestrians who park south of the campus.

Before TU hosted Wichita State for basketball last week, Dickson had a simple but brilliant idea: “Let’s turn on the stadium lights. Lo and behold, that whole area was lighted up. It’s not the long-term solution. We’ve got to get the city to add another stoplight or a crosswalk.”

The long-term solution would be the construction of a four-tiered parking structure immediately east of the Reynolds Center.

“That would be ideal,” Dickson said. “That being said, my time and tenure now is more about the immediate — more of the triage mode.

“We’ve got a pretty significant (on-campus parking) capacity, if it’s available. The problem is, we don’t make it available. Long term — would a (parking garage) be the solution? Absolutely, but I’m not going to be around long-term. I’m trying to figure out how to make it work with what we have now.”

During the 2000 football season, as the Sooners were 13-0 national champions, athletic director Joe Castiglione was the driving force behind OU’s greatest fundraising campaign ever.

After the Golden Eagles’ Sweet Sixteen surge last year, ORU experienced a 133% increase in enrollment applications. A major donation allowed ORU to break ground on the construction of the 10,000-square-foot Mike Carter Athletic Center, which should be open for business in about a year.

For most games at the Reynolds Center this season, the student section was sparsely populated.

Dickson now is at the eight-month mark of a working relationship with Brad Carson, TU’s new president. How does Carson rate as a president who recognizes the importance of successful athletics?

“Whatever the top rating is — four stars or five stars — Brad Carson would get that rating,” Dickson said. “He knows the value of what we’re trying to do for the university.”

Before rolling downtown for his fundraising presentation, Dickson closed with this message that pertained to TU’s marketing and effort: “I just know we can be better than what we have been. When we’ve peaked in athletics here, we were engaged with this city. I was part of it. I’ve seen it.”

Get local news delivered to your inbox!

Wed Mar 9 , 2022
In June 2019, Julian Salisbury sat at a table inside Goldman Sachs’ headquarters. Next to him was a colleague, Sumit Rajpal, and between them, a carafe of water.  The executives, along with Andrew Wolff in London, had been chosen by CEO David Solomon to jointly lead a private-investment business that […] 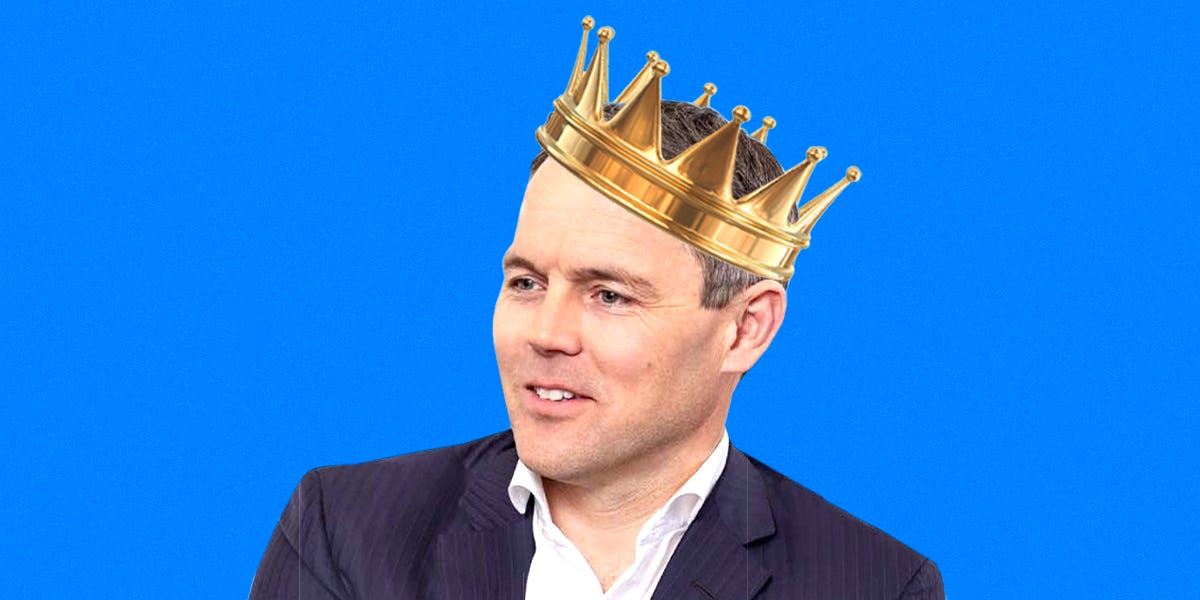