Are food trucks restaurants? Do they qualify as fast food? There’s no answer in the West Tisbury zoning bylaws, which led elected town leaders to hold an unusual joint meeting of the select board, planning board and zoning board of appeals Wednesday night to discuss retail sales and food trucks in the residentially-zoned neighborhoods of Grange Hall and the Agricultural Society.

As the three boards gathered online, the Martha’s Vineyard Film Festival was welcoming masked movie-goers to its first opening night at the Grange, next door to town hall.

“I’m a little apprehensive about how it’s going to go down,” planning board member Amy Upton said of the festival, which received the select board’s permission earlier this year to make the Grange its home.

While the film festival sells chef-made food from the hall’s first-floor kitchen, the twice-weekly Vineyard Artisans Festivals at the Grange relied on food trucks all last summer. 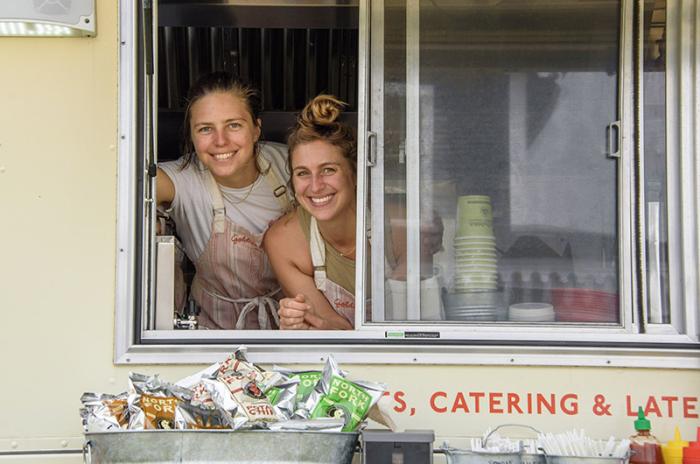 “In practice, we’ve been doing it for a long time,” she said.

In an apparent crackdown this year, West Tisbury zoning inspector Joe Tierney has been denying food truck applications based on a bylaw prohibiting fast food restaurants, defined as those that provide meals without table service.

Soccer games at the West Tisbury School, where Josh Aronie’s food truck served families in the past, have been truckless this season.

But the zoning board of appeals recently overruled Mr. Tierney to allow a rotisserie truck to operate at the Grange during a one-day Climate Action Week event earlier this month.

“The prohibition on fast food sales . . . was designed to not permit things like McDonalds,” ZBA chairman Lawrence Schubert said Wednesday, recalling the late-1970s scare when a New Bedford businessman was poised to open a Golden Arches franchise in Vineyard Haven.

“[The bylaw] was aimed at . . .  mass market fast food establishments,” Mr. Schubert said. “I personally don’t have a problem with one-day permits [for nonprofit events],” he added.

An alternative to rewriting the zoning bylaws, town administrator Jennifer Rand said, would be for the select board to write its own rules on food trucks.

“My definition of fast food is . . . a corporate business that basically mass-produces food, not a truck that makes chicken sandwiches one at a time,” he said.

“The definition of the fast food establishment needs to be figured out . . . I don’t think [food trucks are] going away any time soon. If anything, they’re becoming more popular,” he added.

Although food trucks took up the bulk of Wednesday’s zoning bylaws discussion, the larger topic — retail sales in the village and residential neighborhoods — was thrown into high relief from the outset, when the select board approved a one-day beer and wine permit for a June 29 fundraiser by the Vineyard Preservation Trust.

“We are violating our own zoning, which we should not be doing,” said select board member Skipper Manter, renewing his routinely-stated opposition to all such requests.

“The beer and wine . . . is a retail sale which is prohibited in the village district,” said Mr. Manter, who cast the sole nay vote on approving the permit.

The many questions raised will go next to town counsel Ron Rappaport for review.

“I see this as an opportunity for us to come up with very clear definitions of what we do and do not want,” select board member Jessica Miller said.

Fri May 20 , 2022
The Guardian, in partnership with in-house creative agency OLIVER and Omnicom Media Group’s PHD, has this week launched a range of new marketing creatives across the UK to support the launch of its flagship current affairs newsletter, First Edition. The Guardian’s First Edition newsletter, which began last month, offers readers […]